Icon of Saint Nicholas of Myra

Icon of Saint Nicholas of Myra 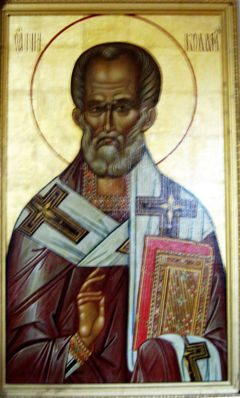 This icon of Saint Nicholas of Myra is on the very right side of our Iconostas.

The veneration with which this saint has been honored in both East and West, the number of altars and churches erected in his memory, and the countless stories associated with his name all bear witness to something extraordinary about him. Yet the one fact concerning the life of Nicholas of which we can be absolutely certain is that he was bishop of Myra in the fourth century.

According to tradition, he was born at Patara, Lycia, a province of southern Asia Minor where St. Paul had planted the faith. Myra, the capital, was the seat of a bishopric founded by St. Nicander. The accounts of Nicholas given us by the Greek Church all say that he was imprisoned in the reign of Diocletian, whose persecutions, while they lasted, were waged with great severity. Some twenty years after this he appeared at the Council of Nicaea,[1] to join in the condemnation of Arianism. We are also informed that he died at Myra and was buried in his cathedral. Such a wealth of literature has accumulated around Nicholas that we are justified in giving a brief account of some of the popular traditions, which in the main date from medieval times. St. Methodius, patriarch of Constantinople towards the middle of the ninth century, wrote a life of the saint in which he declares that "up to the present the life of the distinguished shepherd has been unknown to the majority of the faithful." Nearly five hundred years had passed since the death of the good St. Nich

He was very well brought up, we are told, by pious and virtuous parents, who set him to studying the sacred books at the age of five. His parents died while he was still young, leaving him with a comfortable fortune, which he resolved to use for works of charity. Soon an opportunity came. A citizen of Patara had lost all his money and his three daughters could not find husbands because of their poverty. In despair their wretched father was about to commit them to a life of shame. When Nicholas heard of this, he took a bag of gold and at night tossed it through an open window of the man's house. Here was a dowry for the eldest girl, and she was quickly married. Nicholas did the same for the second and then for the third daughter. On the last occasion the father was watching by the window, and overwhelmed his young benefactor with gratitude.

It happened that Nicholas was in the city of Myra when the clergy and people were meeting together to elect a new bishop, and God directed them to choose him. This was at the time of Diocletian's persecutions at the beginning of the fourth century. The Greek writers go on to say that now, as leader, "the divine Nicholas was seized by the magistrates, tortured, then chained and thrown into prison with other Christians. But when the great and religious Constantine, chosen by God, assumed the imperial diadem of the Romans, the prisoners were released from their bonds and with them the illustrious Nicholas." St. Methodius adds that "thanks to the teaching of St. Nicholas, the metropolis of Myra alone was untouched by the filth of the Arian heresy, which it firmly rejected as a death-dealing poison." He does not speak of Nicholas' presence at the Council of Nicaea, but according to other traditions he was not only there but went so far in his indignation as to slap the arch-heretic Arius in the face! At this, they say, he was deprived of his episcopal insignia and imprisoned, but Our Lord and His Mother appeared and restored to him both his liberty and his office. Nicholas also took strong measures against paganism. He tore down many temples, among them one to the Greek goddess Artemis, which was the chief pagan shrine of the district.

Nicholas was also the guardian of his people in temporal affairs. The governor had been bribed to condemn three innocent men to death. On the day fixed for their execution Nicholas stayed the hand of the executioner and released them. Then he turned to the governor and reproved him so sternly that he repented. There happened to be present that day three imperial officers, Nepotian, Ursus, and Herpylion, on their way to duty in Phrygia. Later, after their return, they were imprisoned on false charges of treason by the prefect and an order was procured from the Emperor Constantine for their death. In their extremity they remembered the bishop of Myra's passion for justice and prayed to God for his intercession. That night Nicholas appeared to Constantine in a dream, ordering him to release the three innocent officers. The prefect had the same dream, and in the morning the two men compared their dreams, then questioned the accused officers. On learning that they had prayed for the intervention of Nicholas, Constantine freed them and sent them to the bishop with a letter asking him to pray for the peace of the world. In the West the story took on more and more fantastic forms; in one version the three officers eventually became three boys murdered by an innkeeper and put into a brine tub from which Nicholas rescued them and restored them to life.

The traditions all agree that Nicholas was buried in his episcopal city of Myra. By the time of Justinian, some two centuries later, his feast was celebrated and there was a church built over his tomb. The ruins of this domed basilica, which stood in the plain where the city was built, were excavated in the nineteenth century. The tremendous popularity of the saint is indicated by an anonymous writer of the tenth century who declares: "The West as well as the East acclaims and glorifies him. Wherever there are people, in the country and the town, in the villages, in the isles, in the farthest parts of the earth, his name is revered and churches are erected in his honor." In 1034 Myra was taken by the Saracens. Several Italian cities made plans to get possession of the relics of the famous Nicholas. The citizens of Bari finally in 1087 carried them off from the lawful Greek custodians and their Moslem masters. A new church was quickly built at Bari and Pope Urban II was present at the enshrining of the relics. Devotion to St. Nicholas now increased and many miracles were attributed to his intercession.

The image of St. Nicholas appeared often on Byzantine seals. Artists painted him usually with the three boys in a tub or else tossing a bag of gold through a window. In the West he has often been invoked by prisoners, and in the East by sailors. One legend has it that during his life-time he appeared off the coast of Lycia to some storm-tossed mariners who invoked his aid, and he brought them safely to port. Sailors in the Aegean and Ionian seas had their "star of St. Nicholas" and wished one another safe voyages with the words, "May St. Nicholas hold the tiller."

From the legend of the three boys may have come the tradition of his love for children, celebrated in both secular and religious observances. In many places there was once a year a ceremonious installation of a "boy bishop." In Germany, Switzerland, and the Netherlands gifts were bestowed on children at Christmas time in St. Nicholas' name. The Dutch Protestant settlers of New Amsterdam made the custom popular on this side of the Atlantic. The Eastern saint was converted into a Nordic magician (Saint Nicholas - Sint Klaes - Santa Claus). His popularity was greatest of all in Russia, where he and St. Andrew were joint national patrons. There was not a church that did not have some sort of shrine in honor of St. Nicholas and the Russian Orthodox Church observes even the feast of the translation of his relics. So many Russian pilgrims came to Bari in Czarist times that the Russian government maintained a church, a hospital, and a hospice there. St. Nicholas is also patron of Greece, Apulia, Sicily, and Lorraine, of many cities and dioceses. At Rome the basilica of St. Nicholas was founded as early as the end of the sixth or the beginning of the seventh century. In the later Middle Ages four hundred churches were dedicated to him in England alone. St. Nicholas' emblems are children, a mitre, a vessel.

1 Nicaea was a city in Bithynia, now northwestern Turkey, a short distance south of Constantinople. The Council of Nicaea, in 325, was the first ecumenical church council, and was called by the Emperor Constantine to bring about agreement on matters of creed.

(About Saint Nicholas  is from "Lives of Saints", Published by John J. Crawley & Co., Inc. )

Icon of Saint Nicholas of Myra
We are: ChurchMotherOfGod.org | Send comments to: This email address is being protected from spambots. You need JavaScript enabled to view it. Thanks.
Copyright 2008 - 2020, Church of the Mother Of God, Mays Landing, New Jersey Visit us on Facebook
Powered By T3 Framework