Icon of the Annunciation to the Theotokos

Icon of the Annunciation to the Theotokos 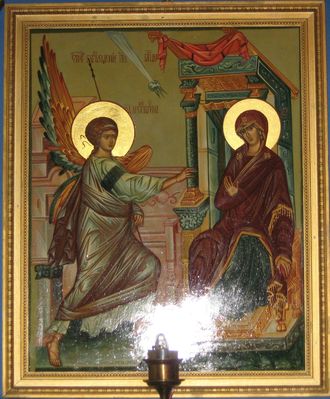 This icon depicts the Archangel Gabriel and the Theotokos as the Angel of God appeared to the Virgin Mary to announce the birth of Christ. (Luke 1:26-37). St. Nicholas Cabasilas says, "The Incarnation was not only the work of the Father, of His Power and His Spirit: it was also the work of the will and the faith of the Virgin." In the words of another holy hierarch, "All creation held its breath, wondering what her answer would be." The Virgin was taken by surprise and was quite afraid, but answered simply, "Behold the handmaiden of the Lord; be it unto me according to thy word."

The icon is one that presents the joy of the announcement of the coming of Christ. It is an icon of bright colors, depicting the Archangel Gabriel, who has descended from heaven, and the Virgin Mary, who has been chosen to be the Mother of God.

The is shown with his feet spread apart as if he is running to share the good news with Mary. In his left hand is a staff, the symbol of a messenger. His right hand is extended toward Mary as he delivers the message and announces the blessing bestowed upon her by God.

On the right side of the icon the Virgin sits on an elevated seat, indicating that as the Mother of God she is “greater in honor than the cherubim, and beyond compare more glorious than the seraphim, who without corruption gave birth to God the Word.”

In her left hand she holds a spindle of scarlet yarn which depicts the task she was assigned of preparing the purple and scarlet material to be used in making the veil for the Temple in Jerusalem. Her right hand is raised in a gesture of acceptance in response to Gabriel’s message. Her posture expresses willing cooperation with God’s plan of salvation. The three stars on her garments represent that she was a Virgin before, during, and after the birth of Christ. 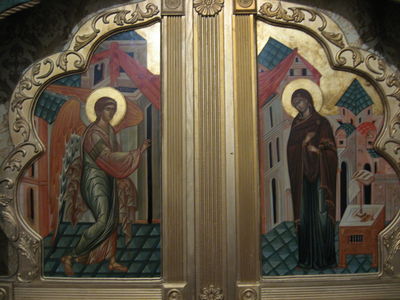 Coming from the top of the icon,  representing  the divine realm, emerge three rays . This demonstrates the action of the Holy Spirit coming upon her.

The red canopy depicts that the action takes place inside the building that it is draped over, the .

When God elected to become man, He desired to do so with the willing agreement of her whom He chose as His mother. The Virgin was a willing participant in God's grace for mankind. She played an active and positive role in God's plan of salvation.

Icon of the Annunciation to the Theotokos
We are: ChurchMotherOfGod.org | Send comments to: This email address is being protected from spambots. You need JavaScript enabled to view it. Thanks.
Copyright 2008 - 2020, Church of the Mother Of God, Mays Landing, New Jersey Visit us on Facebook
Powered By T3 Framework