Icon of the Entrance of the Theotokos in the Temple

Icon of the Entrance of the Theotokos in the Temple 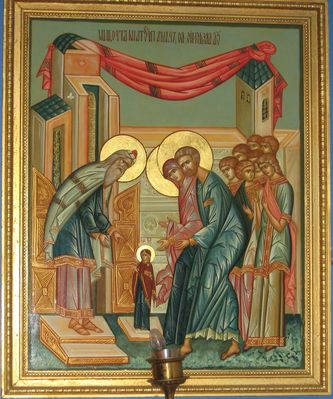 This icon of the feast tells the story of Mary's entry into the . The High Priest, Zacharias, is in his priestly robes standing on the step of the . His arms are outstretched, ready to greet and receive the Virgin.

Mary is shown as a small child, standing before Zacharias with her arms reaching up to him.

On the right in the icon, the young maidens who served as her escort are depicted standing behind her. Also, we see her parents, Joachim and Anna, offering their child to God and His divine service.

The red canopy depicts that the action takes place inside the building that it is draped over, the .

When Mary was three years old, her aged parents, Joachim and Anna took her three days journey to present her in the Temple in Jerusalem to fulfill their promise to dedicate her to the Lord's work. The Virgin was clad in royal garments and she was accompanied by a grand procession of her kinsmen each carrying a lighted candle. There were 15 steps leading up to the Temple. Her parents stood her on the first step, then Mary ran to the top. She was received by St. Zacharias, the father of St. John the Forerunner, as he was the High Priest at that time. He took her by the hand and led her into, not only the Holy Place, but into the Holy of Holies. This was the place that only the High Priest was to enter, only on the Day of Atonement. The only explanation is that he was moved by the Spirit of God. Joachim and Anna offered sacrifices to God, received the priest's blessing and returned home. Mary lived in the Temple for nine years. Her parents visited her often until they reposed. She wanted to remain in the Temple all of her days and never marry. The law had no provision for this. It was unheard of for a girl to vow perpetual virginity. So she was betrothed to Joseph. Joseph was an older man whose wife had died leaving him with small children to care for. He needed someone to help him care for the children and she needed someone to protect her in a society that had no place for a single woman. This allowed her to remain a virgin after she left the Temple at age twelve.

Icon of the Entrance of the Theotokos in the Temple
We are: ChurchMotherOfGod.org | Send comments to: This email address is being protected from spambots. You need JavaScript enabled to view it. Thanks.
Copyright 2008 - 2020, Church of the Mother Of God, Mays Landing, New Jersey Visit us on Facebook
Powered By T3 Framework