Icon of the Nativity of Our Lord Jesus Christ 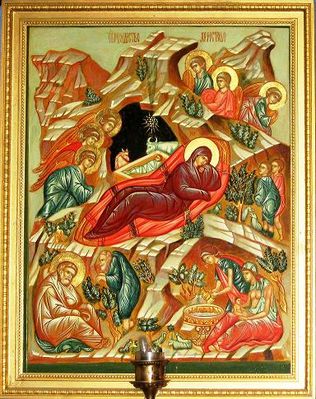 Icon of the Nativity of Our Lord and Savior Jesus Christ

This Icon of the Nativity of Our Lord and Savior Jesus Christ, is found on the Iconostas of our church, in the row of great feasts.

The traditional icon style of the Nativity of Our Lord and Savior Jesus Christ is from the 15th century and attributed to Andrew Rublev. It depicts the Creator of the Universe entering history as a newborn babe. The icon of the Nativity also shows us the effect of this event on the natural life of the world.

The background is an inhospitable world, the world since our expulsion from Paradise. In the center of the icon are Mary, the central and disproportionately large figure, resting in a cave, and Jesus as a baby in a manger wrapped in swaddling clothes. Around the icon is much that deals with the Incarnation of Christ, explained below.

The icon has much symbolism. The little helpless figure in swaddling clothes represents the complete submission of Christ to the physical conditions governing the human race.

The earth provides Him with a cave. The animals watch Him in silent wonder and we humans offer him one of us, the Virgin Mother. His manger is like a casket and His swaddling clothes are very much like the grave clothes: He was born to die for us!

The sky salutes Him with a star, the light of wisdom. This is a sign that Christ came for everyone: "For by it, those who worshipped the stars, were taught by a star to adore Thee, the Sun of Righteousness, and to know Thee, the Orient on high" (from the troparion of Christmas). Some icons have three rays from the star, representing the Holy Trinity. Sometimes nativity icons show the Magi and the shepherds bring their gifts, also a sign that Christ came for everyone.

The women on the bottom right are midwives. This indicates that Jesus was born in the normal way and would have needed washing, as a regular human baby would.

Also in the icon, is an ox, and an ass. The ox and the ass are also from an Old Testament prophecy:"The ox knows his owner, and the donkey his master's crib"  (Isaiah 1:3). They are shown near the Christ child, providing warmth from their breath.

The Righteous Joseph is depicted away from Jesus and the Theotokos, off to the bottom left. This is because he was not involved in the miracle of the Incarnation of the Son of God, but he was the protector of Mary and Jesus. The old man speaking to him represents the devil bringing new doubts to Joseph. The devil suggests that if the infant were truly divine He would not have been born in the human way. (This argument, assuming different forms, keeps on reappearing through the whole history of the Church. It is the basis of many heresies.) In the person of Joseph, the icon discloses not only his personal drama, but the drama of all mankind, the difficulty of accepting that which is beyond reason, the Incarnation of God.

Maryin the center, from her reclining position, looks at Joseph as if trying to overcome his doubts and temptations. She is not the most important figure in the icon, but the most dominant. Sometime she is depicted kneeling, still concerned.

The angels are glorifying God, tending to the action, and ministering: announcing the Good News to the shepherds, or singing.

To the right, a young shepherd sits, wearing a wreath and playing his flute, showing the joy of the Good News.

Icon of the Nativity of Our Lord Jesus Christ
We are: ChurchMotherOfGod.org | Send comments to: This email address is being protected from spambots. You need JavaScript enabled to view it. Thanks.
Copyright 2008 - 2020, Church of the Mother Of God, Mays Landing, New Jersey Visit us on Facebook
Powered By T3 Framework