Icon of the Resurrection of Christ

Icon of The Resurrection of Christ 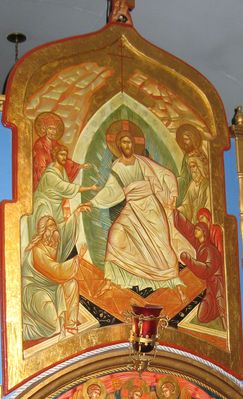 Above the Royal Doors, in the middle of our Iconostas, is an icon of joyous event of the Glorious Resurrection expressed in Orthodox Iconography with the Descent of the Lord into Hades. Christ is shown tenderly pulling our ancestral parents, Adam and Eve, from their tombs. Through His resurrection, Christ has shattered the gates of hell and scattered the chains and locks that bind mankind.

It is also the traditional icon used by the Church on the feast of Easter, the icon of Holy Saturday: the descent of Christ into Hades. It is a painting of theology, for no one has ever seen this event. It depicts Christ, radiant in hues of white and blue, standing on the shattered gates of Hades. With arms outstretched He is joining hands with Adam and all the other Old Testament righteous whom He has found there. He leads them from the kingdom of death. By His death He tramples death.

"I should not have accepted the Man born of Mary.
"He came and destroyed my power.
"He shattered the gates of brass.
"As God, He raised the souls I had held captive."
Glory to Thy cross and resurrection, O Lord!

The Lord is depicted with bright garments within a transparent and interrupted circular "glory" ( mandorla) that follows the contour of the cross-engraven crown of light around His head. The cross is faintly noticeable above His head.

The Lord, having descended into Hades with authority, is seen with a firm footing and a powerful stance upon the gates of Hades, fallen in the shape of an X. With His hands (where "the mark of the nails" is obvious, as well as on His feet) Christ is raising out of the cave of Hades the forefather Adam, who symbolizes the human race, with a vigorous and unilateral motion. As a result of this movement, the garment of the triumphant Christ is shown as being blown upwards by the wind.

Together with Adam, Eve also stretches forth her arms in a beseeching manner. Behind her and a little higher is St. John the Forerunner, who is indicating the Lord. The opposite him, the righteous Abel, a young  man with an ecstatic expression. In the dark cave of Hades, "the locks of death," the age-old bars and chains are seen as if shattered by a supernatural power.

Icon of the Resurrection of Christ
We are: ChurchMotherOfGod.org | Send comments to: This email address is being protected from spambots. You need JavaScript enabled to view it. Thanks.
Copyright 2008 - 2020, Church of the Mother Of God, Mays Landing, New Jersey Visit us on Facebook
Powered By T3 Framework