In our church, rest relics of our father among the saints, the holy New Martyr Metropolitan Vladimir (Bogoyavlensky) of Kiev and Gallich, the first bishop to be tortured and slain by the Communists at the time of the Russian Revolution. 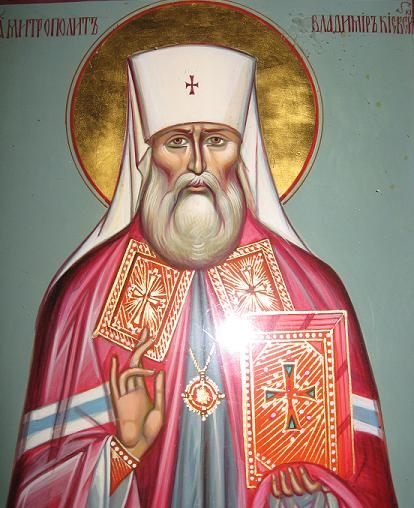 Saint Vladimir was born on January 1, 1848, in the Little Morshanka, Morshansk district, province of Tambov. He was named Basil Nikephorovich Bogoyavlensky. Basil?s father was a [[priest]], but he was murdered when Basil was young.

In 1874, he graduated from the Theological Academy in Kiev and began teaching in the Tambov Seminary. He was ordained a priest in 1881.

After the death of his matushka and only child in 1886, Fr. Basil entered the Kozlov Monastery in Tambov and was given the name Vladimir. Two years later he was consecrated bishop of Staraya Rus and served as a vicar bishop in the diocese of Novgorod.

Kozlov, Novgorod, Samara, Georgia, Moscow, Petrograd, Kiev: such were the successive steps along Metropolitan Vladimir's arduous path of service. At every step, Metropolitan Vladimir kept foremost the need to keep the people within the protection of the Church, to preserve them from sectarian influences and from socialist propaganda, to liberate them from the awful, age-old yoke of drunkenness, and to give them the light of true Christian learning.

Metropolitan Vladimir used to say to the students at the Moscow seminary,

"Perhaps you would say that in our time the bread of the Church has become so stale that it sometimes is like a dry crust that even young teeth cannot chew. But first of all, one must think not about what comes from the people, but what we ourselves can do for them. Our people are poor; their life is rent by the awful yoke of drunkenness. And we must apply, first of all, all our efforts to raising them up, to sobering them, and bringing into their midst the light of true Christian teaching. The family

and the school, the factory and business -- all these and the other branches of societal and government life -- should absorb as the basic, determining tenet of their activity, the spirit of Christ's teaching through the Church, its pastors, and the faithful."

In his spiritual struggle to further that goal, Vladika Vladimir spared neither his strength nor his health. He was constantly on guard, ready for spiritual struggle and for battle as a faithful warrior of Christ. He strove to raise the educational level of pastors and other clergy; he established many cadres of missionaries to the people, organized theological classes for women, inspired strugglers to abstinence in their work, arranged courses to prepare pastors for service in distant Siberia, and waged war against the approaching disease of atheistic socialism--a disease whose danger to Russia was always clear to him. In all of these paths of action, he maintained himself as a pastor of peace and love, unshakable steadfastness, absolute honesty, and eternal dedication to Christ and His Church.

At this time, there were calls for an autonomous Ukraine, and some wanted the Ukrainian Church to be independent from the Church of Russia. Metropolitan Vladimir warned that division in the Church would allow its enemies to be victorious.

It was Metropolitan Vladimir of Kiev who announced in 1917 that St. Tikhon had been elected as Patriarch of Moscow.

In January 1918, many churches and monasteries were damaged by the cannon fire as Bolshevik forces vied for control of Kiev. On January 23, the Bolsheviks seized the Kiev Caves Lavra, and the monks were taken out into the courtyard to be stripped and beaten.

A few nights later, according to one account, five armed soldiers and a sailor came looking for Metropolitan Vladimir. The hierarch was tortured and choked in his bedroom with the chain of his cross. They tortured the metropolitan and demanded money, then drove him away to be executed. Another account just states that some anonymous persons proceeded to take him to the commandant for interrogation. On the way, they decided to rid themselves of him.

The body of the hieromartyr was found pierced by two bullet wounds and three stab wounds. He was carried into the lavra's Church of St. Michael, where he had spent his last days at prayer.

The All-Russian Church Council was in session when word came to Moscow of Metropolitan Vladimir's death. A memorial service for the New Martyr Vladimir was performed by Patriarch Tikhon. An investigatory commission was formed to look into the circumstances of Metropolitan Vladimir's murder, but it was unable to carry out its duties because of the revolution. The council decided that the Sunday nearest to January 25, the day of his martyrdom, would be set aside for the annual commemoration of all of the New Martyrs and Confessors of Russia, killed by the Soviets.

The Synaxis of Russia's New Martyrs and Confessors is also observed on the Sunday closest to January 25.

Metropolitan Vladimir of Kiev
We are: ChurchMotherOfGod.org | Send comments to: This email address is being protected from spambots. You need JavaScript enabled to view it. Thanks.
Copyright 2008 - 2020, Church of the Mother Of God, Mays Landing, New Jersey Visit us on Facebook
Powered By T3 Framework