Icon of the Transfiguration 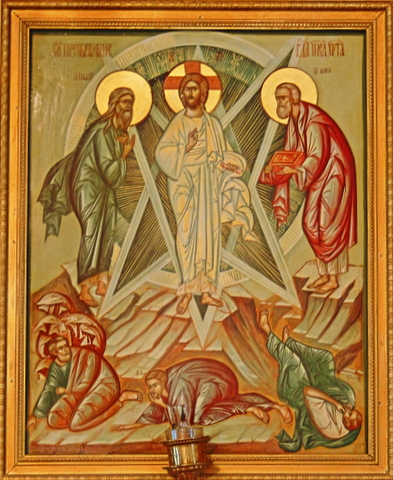 Icon of the Transfiguration

This Icon of the Transfiguration of Our Lord, is found on the Iconostas of our church, in the row of great feasts.

In the icon of the Feast of the Transfiguration, Christ is the central figure, appearing in a dominant position within a circular mandorla. He is clearly at the visual and theological center of the icon. His right hand is raised in blessing, and his left hand contains a scroll. The mandorla with its brilliant colors of white, gold, and blue represent the divine glory and light.

Elijah and Moses stand at the top of separate mountain peaks to the left and right of Christ. They are bowing toward Christ with their right hands raised in a gesture of intercession towards Him. Saint John Chrysostom explains the presence of these two fathers of the faith from the Old Testament in three ways. He states that they represent the Law and the Prophets (Moses received the Law from God, and Elijah was a great prophet); they both experienced visions of God (Moses on Mount Sinai and Elijah on Mount Carmel); and they represent the living and the dead (Elijah, the living, because he was taken up into heaven by a chariot of fire, and Moses, the dead, because he did experience death).

Below Christ are the three Apostles, who by their posture in the icon show their response to the transfiguration of Christ. James has fallen over backwards with his hands over his eyes. John in the center has fallen prostrate. Peter is kneeling and expressing his desire to build the three booths. The garments of the Apostles are in a state of disarray as to indicate the dramatic impact the vision has had on them.

The icon of the feast directs our attention toward the event of the Transfiguration and specifically to the glory of God as revealed in Christ. This event came at a critical point in the ministry of our Lord, just as He was setting out on His journey to . He would soon experience the humiliation, suffering, and death of the Cross. However, the glorious light of the Resurrection was revealed to strengthen His disciples for the trials that they would soon experience.

The feast also points to the great and glorious Second Coming of our Lord and the fulfillment of the when all of creation will be transfigured and filled with light.

Icon of the Transfiguration
We are: ChurchMotherOfGod.org | Send comments to: This email address is being protected from spambots. You need JavaScript enabled to view it. Thanks.
Copyright 2008 - 2020, Church of the Mother Of God, Mays Landing, New Jersey Visit us on Facebook
Powered By T3 Framework