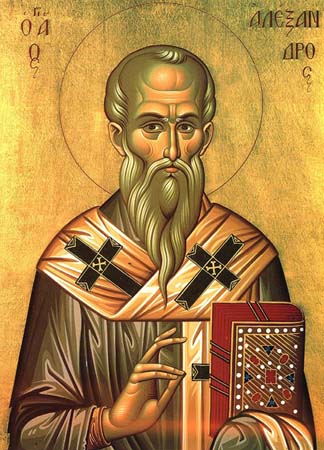 In our church, once rested relics of His Holiness Patriarch Alexander

Saints Alexander, John and Paul, Patriarchs of Constantinople, lived at different times, but each of them happened to clash with the activities of heretics who sought to distort the teachings of the Church. St Alexander (325-340) was a vicar bishop during the time of St Metrophanes (June 4), the first Patriarch of Constantinople.

Because of the patriarch's extreme age, Alexander substituted for him at the First Ecumenical Synod at Nicea (325). Upon his death, St Metrophanes left instructions in his will to elect his vicar to the throne of Constantinople. During these times His Holiness Patriarch Alexander had to contend with the Arians and with pagans. Once, in a dispute with a pagan philosopher the saint said to him, "In the Name of our Lord Jesus Christ I command you to be quiet!" and the pagan suddenly became mute. When he gestured with signs to acknowledge his errors and affirm the correctness of the Christian teaching, then his speech returned to him and he believed in Christ together with many other pagan philosophers. The faithful rejoiced at this, glorifying God Who had given such power to His saint.

The heretic Arius was punished through the prayer of St Alexander. Arius had apparently agreed to enter into communion with the Orthodox. When the Emperor asked him if he believed as the Fathers of Nicea taught, he placed his hand upon his breast (where he had cunningly concealed beneath his clothes a document with his own false creed written upon it) and said, "This is what I believe!" St Constantine (May 21), unaware of the deceitful wickedness of Arius, set a day for receiving him into the Church. All night long St Alexander prayed, imploring the Lord not to permit this heretic to be received into communion with the Church.

In the morning, Arius set out triumphantly for the church, surrounded by imperial counselors and soldiers, but divine judgment overtook him. Stopping to take care of a physical necessity, his bowels burst forth and he perished in his own blood and filth, as did Judas (Acts 1:18).

His Holiness Patriarch Alexander, having toiled much, died in the year 340 at the age of 98. St Gregory the Theologian (January 25) mentioned him afterwards in an encomium to the people of Constantinople.

The Service to St Alexander was printed in Venice in 1771. According to some ancient manuscripts, St Alexander ought to be commemorated on June 2. Today he is remembered together with the holy Patriarchs John the Faster (September 2) and Paul the New (eighth century).

Articles - Saints and Icons Terminology
Loading ...
You are here: Home

St. Alexander the Patriarch of Constantinople
We are: ChurchMotherOfGod.org | Send comments to: This email address is being protected from spambots. You need JavaScript enabled to view it. Thanks.
Copyright 2008 - 2020, Church of the Mother Of God, Mays Landing, New Jersey Visit us on Facebook
Powered By T3 Framework