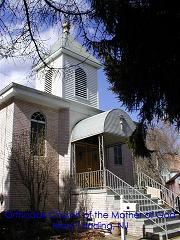 Our church building, and the services celebrated within it, are from the tradition of the church, from the vision of St John the Apostle, as well as the Old Testament Temple. The interior of the Orthodox Church buildings are particularly styled to give the experience of the unity of all things in God. They are not constructed to reproduce the upper room of the Last Supper, nor to be simply a meeting hall for peope whose life exists solely within the bounds of this earth. The church building itself, is an image of the world.

Like the Old Testament Temple, which had a courtyard, a nave and the holy of holies, our church building, just as all Orthodox churche buildings, is divided into three areas: the narthex (vestibule) , the nave (central part of the church), and the altar (sanctuary). Thus, in Orthodox practice, the narthex symbolizes the earthly world. The nave is the place of the Church understood as the assembly and people of God. The altar area, called the sanctuary or the holy place, stands for the Kingdom of God.

At the rear of our church (called the western side) is the main entrance and is called the narthex (vestibule). In the ancient church, this section was set aside for the catechumens, those preparing to be baptized, and the penitents, those who were excluded from Communion on account of grave sins. In the Liturgy, we still hear of "the doors, the doors" that separated the narthex from the nave. The narthex was usually quite large; sometimes it included a pool for the baptism of adults. In our building, it is rather small, with no doors between it and the nave. Candles and prosphora are sold here.

Outside, in the front, there is a stairway leading to the narthex with a landing at the top of the stairs. At this porch, we pause, and say a short prayer, before entering the church building.

Above our narthex , we have a small belfry with one bell and some more bells right in the narthex. The bell is rung at the start, and from time to time, during a service.

The central part of our church, the nave, is where the faithful stand to pray, the faithful Christians on earth who already belong to that holy assembly, "...fellow citizens with the saints and members of the household of God..." (Ephesians 2:19) enter into the eternal worship of God's Kingdom in the Church. 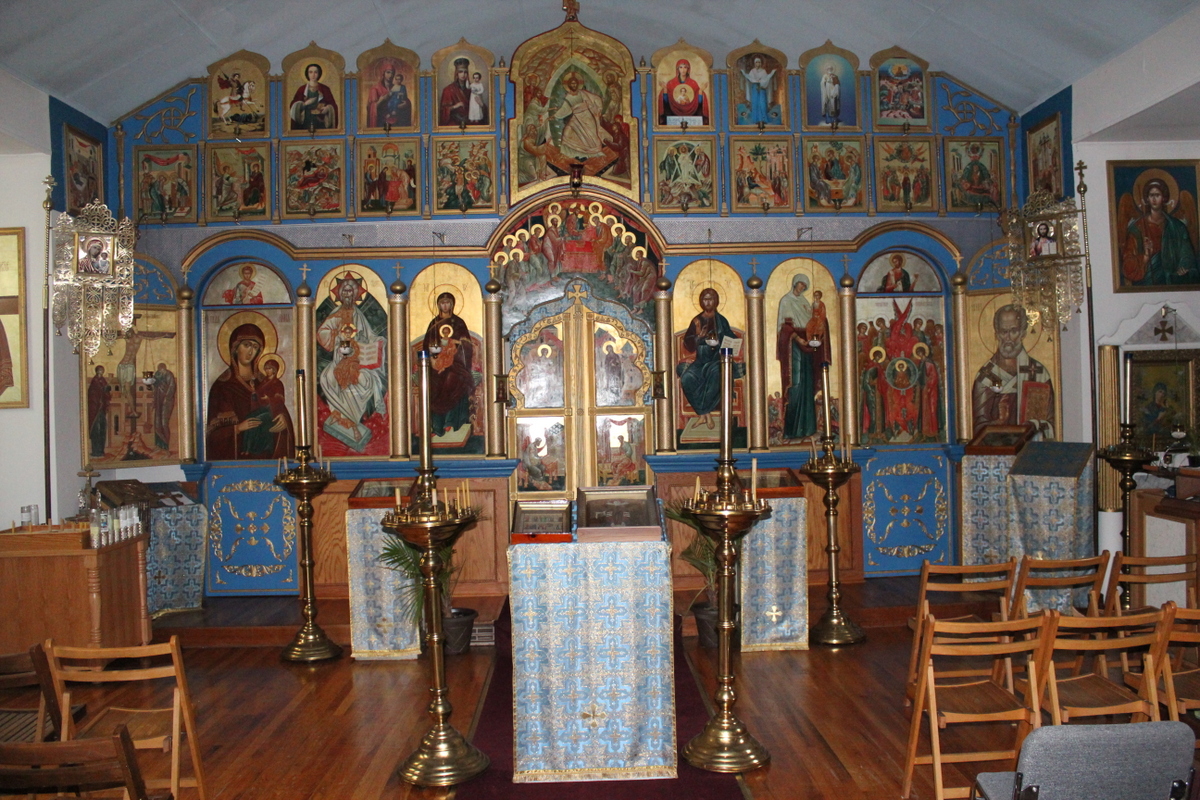 Our iconostasis has three doors in it, leading into the sanctuary. The central doors are called "royal doors"; through them the Lord Himself, the King of heaven, invisibly passes in the Holy Gifts or Holy Communion. To the right of the royal doors is a "deacon door" called the "southern door", and to the left, the "northern door".

Over the royal doors there is, as always, an icon of the Mystical Supper reminding the faithful of the greatest sacrament offered in the church, Holy Communion. This is not just a depiction of the Last Supper, but the portrayal of the continual and same Eucharist that the faithful are celebrating in our parish. Judas Iscariot is not depicted, but others saints that were not at the Last Supper and angels may are depicted.

Our iconostasis has several rows or tiers. The second tier holds icons of the major feast days; The icon of the Resurrection of Christ centers this tier. Currently, the third and top tier, has a few icons of our building's patron, the Mother of God (and a few other icons). And the top of the iconostasis is crowned with a cross.

The iconostasis is situated on

an elevated area called the solea. This area is reserved for those who perform the church services. The middle of this section, in front of the royal doors, is called the ambo. Here the priest (or deacon) intones the prayers of the litanies and reads the Gospel, and the faithful come up here to receive Holy Communion. To one side of the solea, along the side wall, is the areas called the kliros, or choir, where the readers and singers stand. In front of the choir, and on the other side of the solea, are placed the banners, consisting of icons affixed to cloth and attached to long poles, so as to resemble flags hung vertically. These banners are carried during church processions, as the standards of our church.

The altar area, or sanctuary, is the holiest part of the church, containing the altar table itself and the table of oblation. The altar table is a specially consecrated square table, on which the Sacrament of Holy Communion is celebrated. It stands in the middle 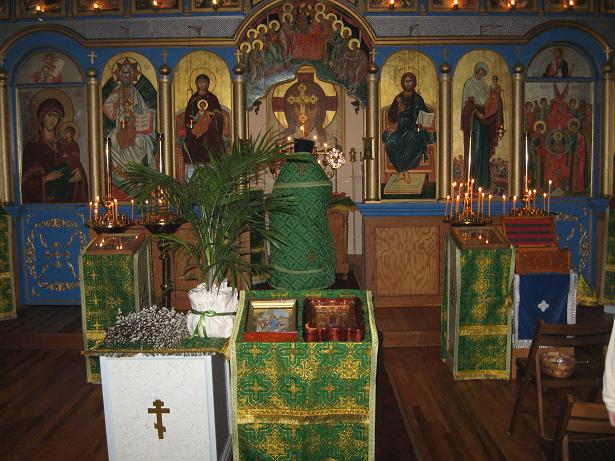 of the sanctuary and is covered by sacred vestments. On it are found the cross, the book of the Gospels, the antimension, the tabernacle and the pyx. The altar table does not merely symbolize the table of the last supper, it is the symbolic and mystical presence of the heavenly throne and table of the Kingdom of God; the table of Christ the Word, the Lamb and the King of the ever-lasting life of God's glorified dominion over all of creation.

The tabernacle is the ark or chest in which the reserved Sacrament is kept. The pyx is a small box in which the priest carries Holy Communion to the sick in their homes. The antimension is a silk cloth upon which are depicted the placing of Christ's Body in the tomb and the instruments of His Passion: the crown of thorns, the spear, the sponge, the column at which He was scourged, the nails, etc.

The antimension bears an inscription, noting when it was consecrated, by which bishop and for which church. Without a consecrated antimension the Liturgy may not be celebrated. To protect the antimension it is enfolded in another silken cloth. On the reverse of the antimension there is sewn a little bag which contains relics, in keeping with the tradition of the first centuries of Christianity, when the faithful used to celebrate the Holy Communion on the tombs of the martyrs. Holy relics are also inside the altar table.

Behind the altar table stands a cross and a seven-branched candelabrum. And two sacramental fans  (Ripidion).

The Table of Oblation is another table in the altar, also covered by sacred vestments. Upon it the proskomedia is performed, the rite of preparing the bread and wine for the celebration of the sacrament of the Holy Eucharist or Holy Communion. This table stands in what is called the northeastern corner of the sanctuary and holds the sacred vessels. First among them are the chalice (cup), into which the church wine is poured, and the diskos, a small round plate on a stand. The diskos usually bears a depiction of the Infant Jesus lying in the manger. It is used to hold the Lamb, a piece of bread, cut out of the center of a little loaf (prosphora), which will be consecrated at the Liturgy, as well as particles of bread cut from other prosphora. Along with the chalice and diskos are found the following items: the asterisk, composed of two bent metal arcs, joined together in the form of a cross, which is placed on the diskos so that the veil will not touch the pieces of bread cut from the prosphora; the lance or spear, a knife which is used to cut out the Lamb and portions of other prosphora; the spoon with which Holy Communion is administered to the faithful; and the sponge used to wipe the chalice.

The altar, towards which the faithful direct their gaze, is traditionally located on the eastern side of the church. Since Apostolic times it has been customary to pray facing the east, which symbolizes Jesus Christ, the Son of God, Who enlightens every man that comes into the world. (The orientation of our building may be a little off.)

Liturgy in the Church

The Liturgy which is celebrated in the church has its origin in heaven, not on earth. We are led to this conclusion by the vision of the St John the Apostle, recounted in the book of Revelation (the Apocalypse). The heavenly liturgy which he describes reminds us of our Orthodox Liturgy in many ways. He saw the altar, the candelabrum, the golden censer with the smoke of incense, the chalice, the Lamb Which was slain in the middle of the altar, elders in white robes and crowns of gold standing in front of the Altar, and then a countless number of angels and righteous people, all praising the Creator (Rev. 4-5). The twenty-four elders correspond in number to the twenty-four priestly courses or divisions established by King David for services in the Temple (1 Chron. [1 Paralipom.] 24:1-18).

So in the church, as in heaven, the Lamb which was slain [i.e., the host, the cut portion of a prosphora] also lies on the altar. St John's vision of souls under the heavenly altar, the souls of those that were killed for proclaiming the Word of God, corresponds to the relics of the holy martyrs, on whose tombs Liturgies were performed in ancient times.

Thus, when we come to church for the Divine Liturgy, we are conscious that we are being allowed to take part in a great and mystical sacred service, at which our prayers are joined with the prayers of the angels and saints who surround the throne of the Heavenly King.

Our Church Building
We are: ChurchMotherOfGod.org | Send comments to: This email address is being protected from spambots. You need JavaScript enabled to view it. Thanks.
Copyright 2008 - 2020, Church of the Mother Of God, Mays Landing, New Jersey Visit us on Facebook
Powered By T3 Framework