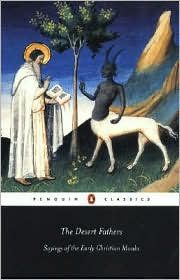 The Desert Fathers: Sayings of the Early Christian Monks

The Desert Fathers were the first Christian monks, living in solitude in the deserts of Egypt, Palestine, and Syria. In contrast to the formalized and official theology of the "founding fathers" of the Church, they were ordinary Christians who chose to renounce the world and live lives of celibacy, fasting, vigil, prayer, and poverty in direct and simple response to the gospel. First recorded in the fourth century, their Sayings-consisting of spiritual advice, anecdotes, parables, and reflections on life-influenced the rule of St. Benedict, set the pattern for Western monasticism, and have inspired centuries of poetry, opera, and art.

Organized around key themes-Charity, Fortitude, Lust, Patience, Prayer, Self-control, and Visions-this edition of the Sayings is fresh, accessible, and authoritative.

Translated, edited, and with an introduction by Benedicta Ward.

Loading ...
We are: ChurchMotherOfGod.org | Send comments to: This email address is being protected from spambots. You need JavaScript enabled to view it. Thanks.
Copyright 2008 - 2020, Church of the Mother Of God, Mays Landing, New Jersey Visit us on Facebook
Powered By T3 Framework