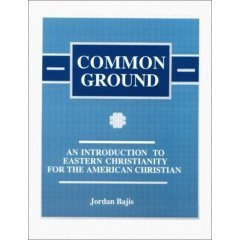 Common Ground: An Introduction to Eastern Christianity for the American Christian

Bajis, Jordan,Common Ground: An Introduction to Eastern Christianity for the American Christian

Provides clear, stimulating answers to the challenging questions that American Christians typically put to Orthodox. But the book goes farther than this. Common Ground begins by showing how Christianity is inherently Eastern, and from there, gently challenges the Protestant and Roman Catholic reader to re-evalute his or her own views of Christianity against the Orthodox perspective. Common Ground is perfect for the Western Christian interested in Ancient Faith, the sincere student of Orthodoxy, and the mission minded Eastern Christian who desires to communicate his faith in a sensitive but compelling manner. The book is a product of three years extensive research and is thoroughly documented. Common Ground definitely helps fill the need for Orthodox literature which can address the concerns of the American Christian. There is no book like it. Revised and expanded. 5th printing.

(This book is no in our parish library yet)

Loading ...
We are: ChurchMotherOfGod.org | Send comments to: This email address is being protected from spambots. You need JavaScript enabled to view it. Thanks.
Copyright 2008 - 2020, Church of the Mother Of God, Mays Landing, New Jersey Visit us on Facebook
Powered By T3 Framework