Holy Fire in Moscow and Jerusalem

Holy Fire in Moscow and Jerusalem

This year, in our parish, there has been much talk of the Holy Fire ceremony in Jerusalem’s Church of the Holy Sepulchre, and that it is brought to the Cathedral of Christ the Savior in Moscow.  We would like to share links to articles with video and photos of both Moscow and Jerusalem.  Please click the links to see the articles:

Russia celebrates Easter as Holy Week draws to an end

Over 300,000 people have visited Moscow’s churches and monasteries over the Easter weekend in Russia. Police patrols were on alert to prevent breaches of peace and crime, with over 6,000 officers deployed to guard the city’s monasteries and churches.
Easter is the red letter day in the Orthodox calendar. The holy day is being celebrated by believers worldwide, with large-scale festivities to be held in Russia on Sunday.
Easter services are also organized at all Russian Orthodox churches across the world, the number of which exceeds 30,000.
But the largest service, helmed by Patriarch Kirill, is being held at the Cathedral of Christ the Savior. The service lasts several hours, well into the early hours of Sunday.
( link to article ) 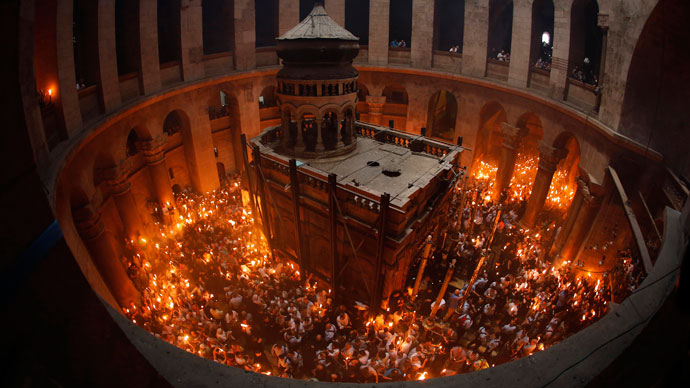 Holy Fire ‘miracle’ in Jerusalem church where Jesus was resurrected

Thousands of Orthodox Christian braved hours of waiting to witness the Holy Fire ceremony in Jerusalem’s Church of the Holy Sepulchre – an important annual rite for the Church’s eastern denominations. In what believers regard as a miracle, every year the day before Orthodox Easter, an unlit blue fire from a stone in the Church descends from the dome and ignites a candle held by the Patriarch of the Greek Orthodox Church in Jerusalem. Around 10,000 people squeezed into the Church of the Holy Sepulchre – regarded by many as the place where Jesus was laid to rest and resurrected – with about as many waiting outside.

Holy Fire in Moscow and Jerusalem
We are: ChurchMotherOfGod.org | Send comments to: This email address is being protected from spambots. You need JavaScript enabled to view it. Thanks.
Copyright 2008 - 2020, Church of the Mother Of God, Mays Landing, New Jersey Visit us on Facebook
Powered By T3 Framework